The Theory of Poker Applied to No-Limit 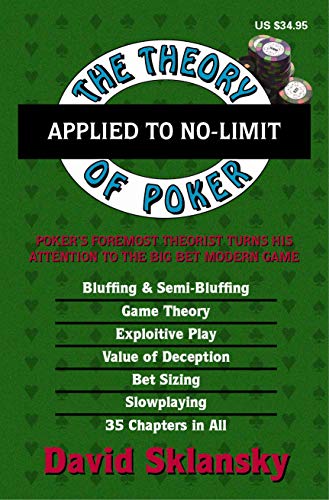 The Theory of Poker by David Sklansky has long been recognized as the foundational book for all of poker no matter what the game, and at the time of this writing is still the best selling book in poker. But that book, while applicable to many aspects of no limit and pot limit poker was originally written mainly with limit games in mind. Now, the most popular form of poker is no-limit hold em.
As a result, David felt it was time to write a new book that would methodically address each of the chapters in the original Theory of Poker, summarize them, and then go into lengthy detail as to how the ideas and concepts in those chapters need to be altered, when necessary, to best deal with no-limit and pot-limit games. There are also a number of new Bonus Chapters and Bonus Thoughts with new material specifically targeted toward those big bet games. There s an emphasis on no-limit hold em, (especially small to mid stakes), but the ideas almost always apply to pot-limit Omaha, no-limit single draw deuce-to-seven lowball as well as most other one winner big bet games.

As with the original book, The Theory of Poker Applied to No-Limit is not a handbook that tells you how to play specific cards in various situations. (Except for example hands that are sometimes used to make ideas as clear as possible.) Rather it tells you what to think about before making your own decision. It shows your how to combine your knowledge of your opponents, your knowledge of poker math (including, where appropriate, the math known as game theory or GTO ), and astute logic to derive the best play (and its occasional alternatives).

There are a few difficult sections that probably need to be read a few times. Most of the book, however, will be easily accessible to intermediate players, especially with the help of the Key Points at the end of most chapters.

We at Two Plus Two Publishing LLC are proud to bring you this book, and expect it ll be quickly recognized as one of the most significant poker books in many years.